When we arrived at our destination (Catalyst Science museum) it wasn’t open yet so we walked round the grounds. On our walk, we saw a bridge that was being constructed; it was going to be a suspension bridge when finished.

After that, Catalyst was open so we went inside. Our first activity was on the top floor in the observatory. There we were met by two engineers who asked us to look out of the windows and find as many bridges as possible. The view from there was impeccable; you could see several different types of bridges in the surrounding area, including an arch bridge and a suspension bridge. Following this we were given a set of K’nex (K’nex is a bit like Lego) and an instruction booklet. Then they explained that in the construction set were the pieces to make a model beam bridge. We were split up into teams and started making our models. My team were making it much quicker than any other team so we were told to take out a few strengthening pieces to show the class just how important they were. As soon as everybody had finished, we tested each bridge using bean-bags. As our bridge had just four supports, it hinged like mad. Every team’s bridge survived including our hinging one.

We finished this workshop ahead of schedule so we had time to go into the puzzle room. In here there were lots of puzzles and games. One of the games was called Nim’s game. The game consisted of twelve rectangular pieces; the rules were you could only take pieces in the same row. The aim of the game was to make your opponent to take the last piece.

After lunch, we walked to our next activity where we were met by Claire and Eddie again; however, this time we had 3 more engineers named Tom, Marcus and Joanna. Our task was to build a suspension bridge covering about ten metres. Firstly, we were split into two groups and put on high visibility jackets, gloves and hard hats; these were to keep us safe. Following that Claire told us how to put the different parts together, this was really important as otherwise we would not be able to complete the task.  We were then told to start making. To start with, we clipped a wooden plank to a weighed down frame, after this, we attached this plank on steel cables to another aluminium frame. Following this we put two metal pegs into the plank and, using the same method, attached another plank. We kept on repeating this until the two sides met in the middle. To test it, everybody walked across it and it held them too. Then came the next part; taking it apart. To do it, we had to reverse the method to put it together. This was difficult as the steel cables were really tight, this made them difficult to undo. Eventually, we had taken it down; therefore we had completed our task.

We had completed all our tasks so we had to get on the bus to go home. 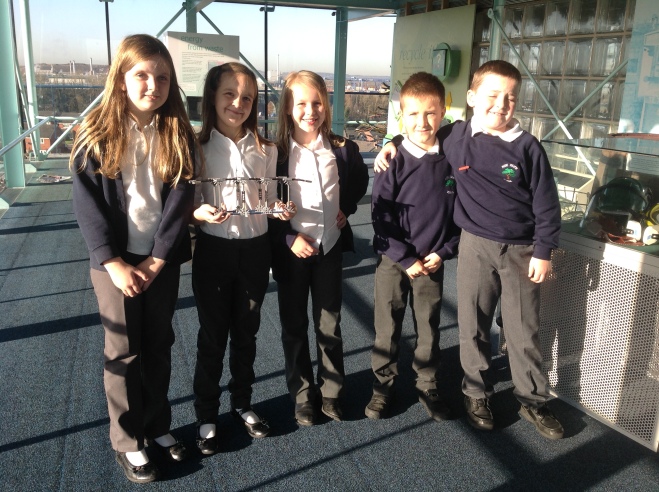 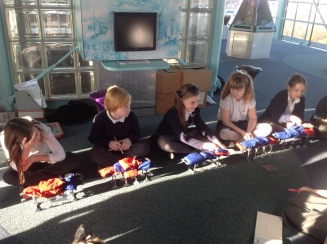 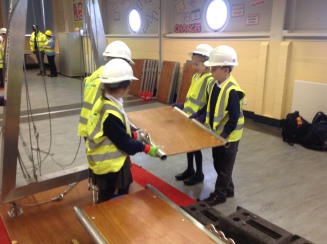