Today was our first Rodeheath session with Skill Supply, learning about drones. The Year 4s were very excited and clearly demonstrated their growing understanding of engineering with their confident responses to questions. They could tell their instructors that engineers: “Make new things, but also improve existing products by making them better.” And, they talked knowledgeably about the Engineering Habits of Mind that engineers use in their day to day work – habits that we are introducing throughout the school with our Think Like an Engineer project.

All in all, this day’s activity fitted in perfectly with our goals. Initially, the children were given a series of pictures and asked to identify how drones might be used in different situations. This generated some very imaginative and interesting answers. It was agreed that there were many positive uses, including transporting medical supplies to remote areas and using thermal imaging technology to trace people trapped as a result of natural disasters.

Soon it was time to try some activities. The first was simply to programme the drone to move forwards and then backwards from and to a designated point. This was to help the children decide how to judge distances using time and motion. The children were using Parrot Drones and programming using Tynker Coding – an app which looks just like Scratch, something they are very familiar with.

To contain the drones and ensure that the activities were both safe and manageable, a large enclosure had been erected in the classroom, surrounded by thick black netting. The children worked very successfully in groups of three, with half the groups flying the drones at any one time. Each group was provided with an engineering workbook into which all their planning, programming, reflection and improvements were entered. Different roles were assigned to the children, which they then swapped around as the activities progressed. By the end of the day this meant that everyone had tried each responsibility.

Not everyone succeeded first time with their programming, especially as the tasks become more complex, but each group learned from their experiences and could modify their code to improve their outcomes.

One of the important lessons learned was that reducing the speed of the drone to 50% gave a better result. By repeatedly trying out the code, the children were soon able to work out how far their drones would travel in a defined number of seconds: at 50% speed, this was about 0.5m per second – still quite fast. Having learned this, it became much easier to place their drones in specific locations. There was also an ‘emergency’ piece of code, which could be activated if the drone got into difficulty – something which happened quite frequently at the beginning, as the over exuberated children sent their drones hurtling into the netting at the back. The emergency feature stopped the props spinning immediately and saved the motors from burning out. It soon became fairly redundant though as the children become more proficient.

The second task was entitled “Prime Delivery” and this mimicked sending the drone to deliver a parcel safely. The children had to land the drone at the back of the enclosure, wait (for the parcel to be retrieved) and then come back to base. I was really pleased to see how the children were learning from their first task and this was executed much more successfully by most groups.

One of the useful tasks that drones undertake is to inspect buildings as they are being erected. This makes life much quicker and safer for the engineers. The third task was called ‘High Rise’ and involved the children sending the drone around a set of steps and landing on one of the levels, before returning safely to base. This proved more challenging for the Year 4s; although they persevered well and just found they had to adapt their code more often this time. 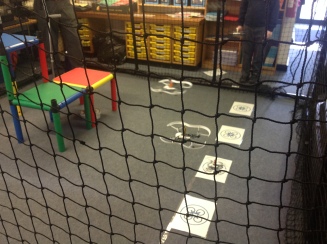 It was great to see the children so engaged on their tasks and lovely to hear the absolute whoops of joy as their missions met with success. I will be intrigued to read the entries in their workbooks to see how they have documented their approaches to problem solving and adapting their initial ideas.

Thank you, Skill Supply, for a wonderful day – the first of many drone workshops. Indeed, we are looking forward to receiving the Airblock modular drones that we backed earlier in the year on Kick Starter. Now, I feel that we have a good grounding in how to operate them.

Here are some thoughts on how the children felt they were using EHoM:

One thought on “Programming Drones in Year 4”