Just before we broke up for Christmas, Mr Randall and I held two workshops with the Year 3 & 4 classes to try and build some water-powered pop bottle cars. Letting more than 60, 7-9 year olds, loose with saws, glue guns and drills, was quite a daunting prospect, but the children were very keen and we had a reasonable amount of adult help. What could possibly go wrong?

I love this idea, as the initial inspiration came from Ellie Jepson, a pupil in my class. She had spent the weekend working on a car with her dad and brought it into show us the following Monday. Not only that, but she then demonstrated her designs to all the KS2 classes – very confidently and articulately – clearly demonstrating that our Think Like An Engineer project is having an impact on learning. Not only are parents getting involved, but children are taking more responsibility for their own learning – fantastic.

To start Ellie’s water-rocket car project off, we set a piece of homework, which tasked the Year 3&4 children with producing some designs. They had to think about what kind of wheels they might use; how they were going to attach them to each other and the body of the car, and what they could do to make sure that it travelled as far and as fast as possible.

Some excellent ideas were produced and a couple of weeks later, we set about making some chassis to accommodate our pop bottles. It was fantastic just watching the engagement of the children and how on-task they were. 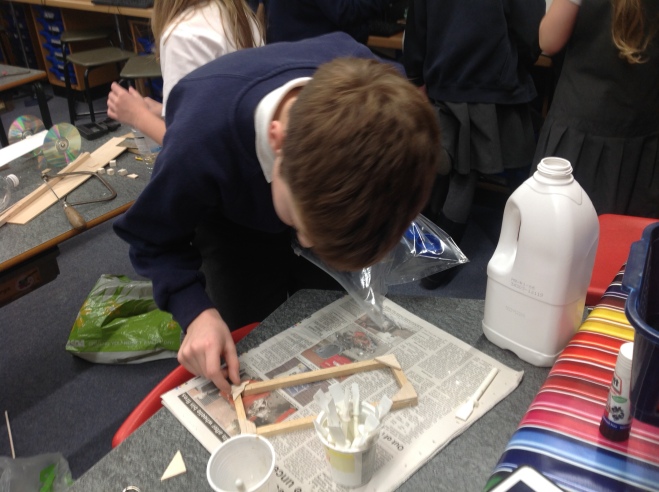 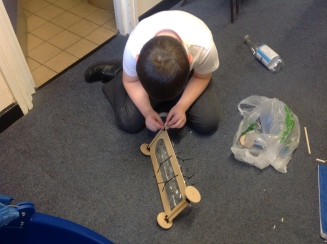 This was the second session we had held with two classes. The first had been an afternoon of learning basic skills, such as sketching, marking and cutting, joining materials and strengthening and reinforcing. This set of activities was taken from the James Dyson Ideas Box – a free kit for schools, which introduces primary children to the design process, using a Dyson Air MultiplierTM fan as a case study.

It was certainly a worthwhile exercise, with the benefits clearly visible in our chassis making session. Children were quite happily building, testing, deconstructing and improving their designs. All we needed now was a simple mechanism to reliably release them.

I found this clever device online at http://waterockets.com/

It consists of a

length of plastic hose, one end of which goes into a bicycle pump and the other end in a hole in the rocket’s bottle cap.

As you pump, the balloon-type end in the cap expands, holding the bottle in situ. As the pressure gets greater the balloon starts to gently slip out, eventually releasing the bottle, which then shoots off at great speed.

As a launching device, it worked extremely well; however, unfortunately, our cars were not quite strong enough to survive their journey!

It proved to be an excellent learning curve for the children. It was soon very clear that we needed to make our chassis much stronger; attach the bottle more securely and choose sturdier wheels . Moving in a straight line definitely proved quite difficult; although we did have some guide rods that we could have used.

Next we are thinking of adding a motor to our chassis, which would definitely be more controllable! Some children have already had a go.