They say that you only really know whether you understand a subject if you can teach it to someone else. Well, that’s what happened during the afternoon of Monday 16th January, when the Year 5 class shared their BBC micro:bit expertise with the Year 6 class. 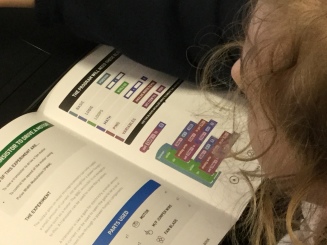 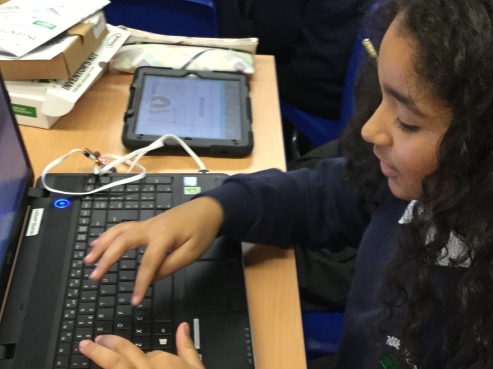 Mr Scott, Year 5 teacher and IT co-ordinator, was very pleased with the outcome:

“The Year 5 children were excellent mentors, coaching older children on something new. They were able to implement one of the Engineering Habits of Mind – Systems Thinking – in order to explain how the software works.

The pairs then progressed to more varied and complicated lessons using the micro:bit and the Inventor’s Kit equipment. It was very interesting to see how Year 6 adapted to being taught by younger children and how they advanced as learners – operating the Breadboard.

This example of mentors helping others was a very worthwhile experience for the children involved and the teachers. It showed how mature and responsible the children can be when faced with a challenge.”

The Year 5 children were equally enthusiastic:

“It was very interesting to see how the Year 6s reacted to the micro:bit. They seemed to be very intrigued to learn about it. We had a go at different activities from the booklet that comes with the Inventor’s Kit, including a fan, a buzzer and a magic 8 ball. We think that the Year 6 class benefited from this help. You could tell because of how quickly they were able to use the product independently, once we had shown them the basics. We enjoyed being teachers and felt that it helped with our own understanding. Next time, we think we need to be more patient. We are hoping to go back in a few weeks to check understanding.”

We are waiting to hear from some Year 6 children . . .

The BBC micro:bit is a hand held, fully programmable computer, which was originally given free to all Year 7 children. It has many features including 25 red LED lights that can flash messages. When the product became generally available in 2016, we bought 15 Inventors Kits for our Year 5 class. Having spent the previous year using Codebugs in Year 4, the children were well placed to transfer their knowledge to the micro:bit. After learning the basics, they have recently being designing a trap to capture a Yeti – linking engineering to their class book: The Abominables.

For more information about the BBC micro:bit visit: http://microbit.org/about/

“The Year 5s were good at teaching us about the micro:bits; they really helped us all to move our learning on. I am now more confident with programming a micro:bit and can now code by myself. I can even make a fan spin round.

If you don’t know what micro:bits are, they are pocket-sized programmable computers. They can copy code onto a chip, which allows you to transport it on to another laptop. It’s also capable of answering ‘yes’ or ‘no’ questions.”