This month has been taken up with adding our final touches to our Marble Revolver – Rode Heath’s entry to the Greater Manchester Engineering Challenge. This project follows on from Tinker Tailor Robot Pi  which Rode Heath has been actively involved with for the past two years and which culminated in the creation of the hugely successful Manchester Robot Orchestra –  https://www.youtube.com/watch?v=xfchOSrXeXs

It is hoped that the Marble Run will be the first of a series of annual challenges each aimed at engaging primary and secondary pupils and their teachers in the engineering design process.

The competition was divided into four distinct categories: computing, science, D&T and literacy. Participating schools had to design their marble runs with one of these in mind. As we already had some experience with the Crumble Controller, Mr Randall and I decided to focus on the computing category. This required us to build a marble run and then automate it. Sounds simple? Well it was a lot more challenging than we anticipated. And, I hate to think how many batteries we have consumed in the process.

Fortunately, schools were supported in their efforts and in January we took some Year 4 children to a meeting in Manchester University which you can read more about in our January post. Since then, the Year 3s, 4s and 5s have worked hard to overcome problems and come up with a working machine. The finished product certainly looks very different to the sparse pegboard featured in our previous post.

The key to the design was coming up with a way in which the marbles would continue to travel around the track. Many intriguing ideas were put forward and eventually we decided on a pulley system, driven by a motor.

We were having problems with our initial cardboard buckets, so the Year 5s were challenged to design a 3D version, which they did brilliantly. In fact, the whole process was a great KS2 engineering collaboration.

The criteria for the computing category were as follows:

We decided to use a distance sensor to start the pulley working – which actually saved quite a lot of battery power. People had to work past the marble run in order to activate it. This caused quite a lot of amusement for the Rode Heath pupils as staff did not realise what was happening and were spotted peering at the contraption in wonderment – this became especially funny when we played back footage from the secret camera we had installed.

Another sensor was used to trigger a chime bar (stirring fond memories of our Strike a Chord Robot). When the marble passed under the sensor, this caused the chime bar to lift to let the marble pass, but not before it had collided with the bar giving a pleasing dinging sound.

Getting this second distance sensor to work proved the most challenging aspect of the marble run. In retrospect, it was probably not the best one to choose, but we persevered and in the end devised a wooden flap which was lifted by the bucket and triggered the sensor once the marble had passed. This actually worked quite well, as it gave some time for the marble to hit the chime bar before it lifted.

children have certainly been completely enthralled by the process. It was so difficult to choose who to represent the school at the final Manchester event. Everyone had played a part. Indeed, not a week went by without a pupil coming to show me a marble run they had made, or a poem they had written about the marble run.

The day finally arrived and all problems seemed to have been ironed out – apart from the logistics of actually transporting the beast. We decided that the only feasible means of travel was by car. Lugging the pegboard – which was very heavy – up and down the stairs at Sandbach and Piccadilly station, was quickly dismissed.

Manchester University had kindly provided us with free parking at Charles Street – close to Sackville Street – although we could only find spaces on the top floor, which was far from ideal.

Mr Randall manfully carried the board to the lift and after some negotiation across a couple of streets, we arrived at the Great Hall.

The quality of the marble runs was truly amazing, and all were very different. Some schools had focused on the D&T aspect, some on computing and there were some excellent videos that had been made as part of the Literacy category.

Our Rode Heath marble run quickly drew the crowds and proved very popular with the other schools. Mr Randall and I were very proud of the children, who articulately explained how the marble run worked and talked with confidence about how we had solved the various problems that had been encountered.

positive comments from the judges

The judges were very impressed by the amount of technology that we had incorporated and were particularly taken by the 3D printed baskets that the Year 5s had produced. 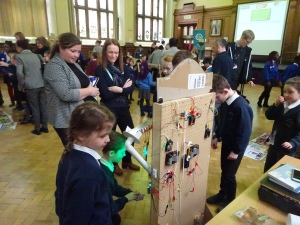 We had to vote for our favourite marble run, which was very difficult as they were all amazing, as you can see from the pictures below:

The overall prize was won by Bowker Vale school whose marble run emitted a spectacular glitter explosion at one point. We felt that our entry was the pupils’ choice though and were very proud of all our efforts.

A PowerPoint showing our marble run journey can be seen below:-

And here is a video of our marble run in action:-

Schools can still take part in the marble challenge. To find out more follow this link: https://seerih-innovations.org/tinkering4learning/project/the-greater-manchester-engineering-challenge/